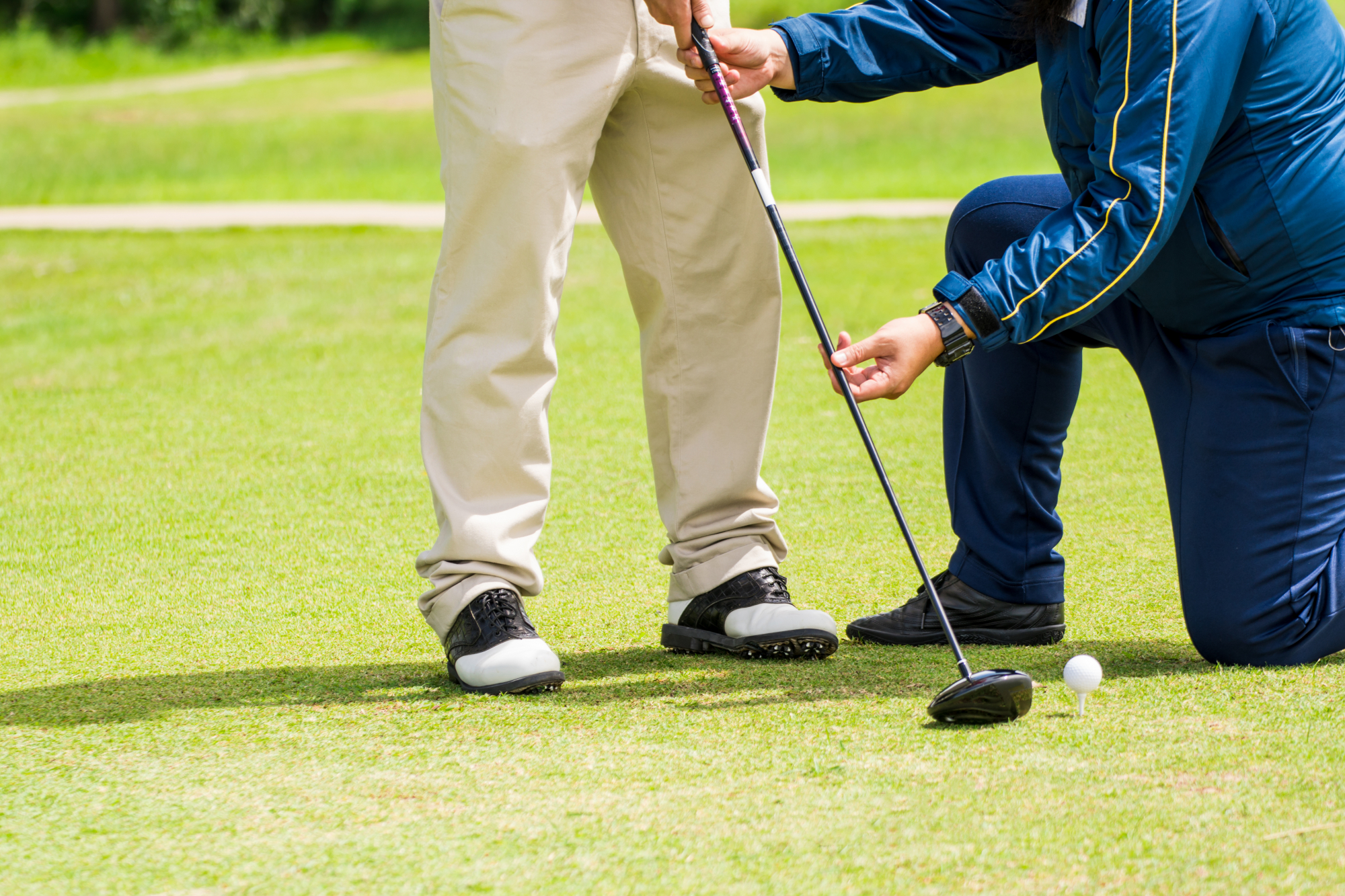 You’ve already had a go at your first golf swings: you’ll find everything you need to know here about progressing from beginner through to your first handicap.

There are several possible ways of becoming acquainted with golf. You can either take part in a taster course at a golf club or start a “short course“. You’ll find an overview of the driving ranges in the downloads.
In addition, all 98 Swiss Golf clubs have their own driving ranges and practice facilities, most of which are open to the public.

The most important questions asked by beginners

Do I have to be a member of a golf club to be able to play golf on a course?
No, but you do need a certificate confirming that you have the course authorisation or a golf handicap. You can obtain this certificate from your club or from one of the two organisations affiliated to Swiss Golf (ASGI or Migros Golfcard).

Can I also learn to play golf on holiday?
Of course! For beginners, in particular, golfing holidays are the ideal opportunity to become acquainted with the sport of golf in a relaxed atmosphere.

Is a course authorisation gained abroad also valid in Switzerland?
No, as a rule, a Green Card test must be supervised by a Swiss pro.

Are there any golf clubs where I can play without a Green Card?
Not many in Switzerland. Otherwise, driving ranges and short courses are a good alternative.

As a newcomer to the game, you come across a whole range of terms in golf. We present the 10 most important ones here at a glance.

The “language of golf” is English

Here are all the key terms with a few useful explanations:

Albatross: A player who remains three strokes under par on a fairway plays a (very rare) albatross. This is most likely to happen on a par-5 hole.

Air shot: Attempt at a shot but one which misses the ball. Since the latest rule change, no longer counts as a stroke.

Approach: A shot over a short distance with the purpose of reaching the green and getting the ball as close as possible to the flag.

Bag: The golf bag is often simply referred to as bag.

Birdie: Score of one stroke under par on a hole.

Break: curve followed by the ball rolling on the green when the green is not level.

Bunker (sand obstacle): deeper area of ground filled with sand, which is usually close to the green or on the fairway.

Cup: a cup is the inset in the hole or the hole itself

Cart: motorised buggy which carries golfers and their clubs around the golf course.

Chip: an approach shot from the immediate vicinity of the green, intended to get the ball, in low flight, into the hole where possible, or at least close to the hole.

Club (golf club): a club with a head made of wood, iron or synthetic materials. Clubs have different loft angles, which make it possible to play shots of varying distances with the same swing. (Maximum 14 clubs). There are three different types of club: woods, irons and putters.

Clubhouse: as in many other kinds of sport, the building housing changing rooms, restaurant, bar and other facilities.

Dogleg: hole with a fairway that bends to the left or right.

Drive: the first shot from the teeing ground. On a long hole, usually hit with a driver.

Driver: the club with the longest shaft for the farthest distances, used almost exclusively from the teeing ground.

Drop: letting the ball fall to the ground from your hand in accordance with the rules of golf in order to bring it back into play – from knee height.

Divot: a piece of turf removed with a club when playing a shot. It must be replaced and pressed in immediately in accordance with etiquette.

Eagle: a score two strokes under par, for instance, a three on a par-5 hole.

Etiquette: code of good manners towards fellow players on the course. Etiquette covers guidelines regarding safety, courtesy and consideration, and priority on the course and care of the course.

Fairway: the expanse of grassed area between teeing ground and green,where the grass is cut short.

Flight: describes a group of golfers, usually consisting of two or three players but never more than four.

Fore: internationally customary warning shout by a player where a risk is posed by a wrongly hit ball which could endanger the other players on the golf course.

Green: a surface area with particularly short grass prepared for putting, where the placement of the hole is often changed.

Green fee: fee payable by a non-member in order to play on a course.

Greenkeeper: the member of staff of a golf club who is responsible for tending the course.

Grip: describes both the way in which a player holds a club in their hands and that part of the club (made of leather or rubber) where the club is held.

Handicap Index: term used for the playing potential of amateurs. Professionals do not have a handicap.

Hole-in-one: playing a fairway with just one shot from the teeing ground into the hole (also called ace).

Links: a “links course” is a golf course which has been laid out on sand dunes on a sea shore.

Par: par is the number of strokes which has been laid down as the ideal number of shots for a hole or course. For example, a par-4 hole should be played in four strokes.

Penalty (penalty stroke): number of strokes stipulated in the rules, which a player has to add to their score when infringing the rules during the game.

PGA: abbreviation for the Professional Golfers’ Association. PGAs are the professional associations of golf professionals. The national PGA in Switzerland is the Swiss PGA.

Pin position: describes the position of the flag stick on the green. The pin position is changed regularly to protect the green.

Pitch: a short stroke where the ball descends as steeply as possible so that it does not roll for long but comes to rest as quickly as possible.

Pitching wedge: a club (iron) with a very high loft which, after the moment of impact, makes the ball rise and fall quickly and prevents it from rolling far. The pitching wedge is used for approach shots (pitches) around the green in particular.

Pitch mark: this expression describes an indentation in the green caused by a ball landing on it. It is good etiquette to repair this pitch mark on the green.

Pro: abbreviation for "professional", a professional golfer who either gives golf lessons (teaching pro) or earns a living from prize money (playing pro).

Pro-Am: a competition in which professionals and amateurs form a team.

Pro shop: shop which is generally run by the pro and where the equipment and clothing required for playing golf can be purchased.

Putt: a putt is a stroke usually made with a putter on a green. The ball rolls on the ground rather than flying through the air.

Putter: club with a vertical striking surface or face, which is used on the green to roll the ball into the hole.

Range fee: fee payable in advance by a guest at another golf club for the use of the driving range and other practice facilities.

Rough: describes the areas around the fairways and greens where the grass is left to grow longer than on the fairways.

Score: the score is written down on the score card after playing each hole. In this way,  the total score can be added up after 9 or 18 holes.

Swing: the whole sequence of movement of the player when making a stroke.

Tee: this word has two meanings in golf. On the one hand, it describes the teeing ground (or tee box), an area marked out, from where the first stroke is made on a hole. On the other hand, tee also refers to that little wooden or plastic object which you insert into the ground in order to raise the height of the ball for teeing off.

Top: hitting the upper half of the ball at the moment of impact. The shot is usually a poor,short and jerky one.

Wedge: a club for approach shots with a high loft to facilitate high short shots.

Golf etiquette describes sporting conduct on the golf course and encompasses written and unwritten rules. Adherence to those rules is intended to ensure the safety of all players and protect the course as much as possible.

The course permit is the first step for anyone interested in becoming a universally recognised golfer. Most clubs decide based on their own criteria, whereas the course authorisation is uniformly regulated in Switzerland.

Within the framework of its internal rules and regulations, every golf club can make its own decisions regarding the preconditions under which playing on its own course is allowed. The criteria for the course permit may, therefore, vary widely from one golf course to another. In general, the aim is to ensure that beginners do not play on the golf course until they pose no risk to themselves or others on the course and can guarantee a fairly brisk pace of play.

In order to be allowed to play on your own on the various golf courses in Switzerland, you need a kind of “driving licence”, similar to passing the driving test.

A. Theory test
40 questions about etiquette and rules. You pass the test if can you answer at least 28 questions correctly.

B. Practical test
Playing on the driving range: a Swiss PGA pro assesses, among other things, tee shots or perhaps playing out of a practice bunker. Here, for example, 2 out of 6 balls must come to rest on the green.
After passing the theory test and playing on the driving range, the test can take place on a course.
The following are tested here
The objective of the course authorisation test is to enable the first-time golfer to prove that they

One of the peculiarities of golf is the so-called handicap: this is a system that is applied in order to determine how well golfers can play.

Think you know the rules of golf? Test your knowledge to find out whether you’re a beginner or a master, then challenge your friends to do the same!